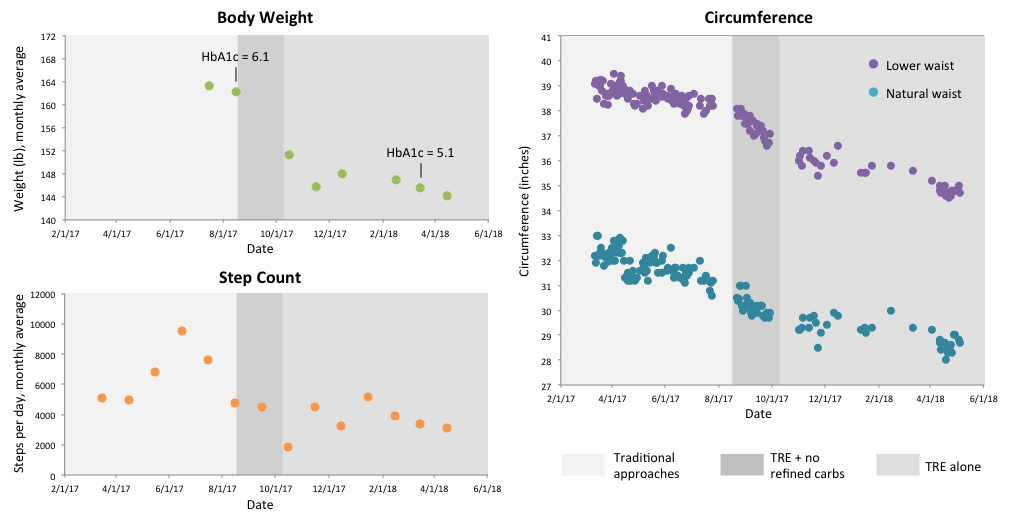 This post is by a scientist diagnosed with pre-diabetes, who then chronicled their experience using time-restricted eating (TRE) to reverse the condition.

I’m a scientist who has studied both type 1 and type 2 diabetes at Harvard University. I thought I knew a great deal about the disease, and how to stay healthy, until I was diagnosed with pre-diabetes. Here, I describe my experience using time-restricted eating to reverse this condition.

Finding out I was pre-diabetic

During a particularly stressful period in my life, I found myself eating more in the evenings; soon thereafter I found out I was pre-diabetic, through a chance reading on my dad’s glucose meter. I was 34 years old, my body-mass index was normal, and I’m generally the most health-conscious person in my family, so this came as a surprise. Upon thinking about it, however, I realized this could be true. I was at the higher end of my ideal weight range, and my dad was diagnosed with type 2 diabetes at a similar age, which meant that I have a potentially predisposing genetic background. A number of questions came to me. Was this reversible? How long before I would lose beta cell function? Was this another type of diabetes? The pieces fit together for this to be insulin resistance, which I knew could be tackled by losing weight.

Five months prior to the diagnosis, I had been trying to lose weight. I adopted mindful eating habits – keeping a food journal, eating when hungry, stopping when full – and increased my physical activity. This had become a yearly pattern, where I would start trying to lose weight in March, I would see positive results by the fall, and I would regain the weight over the winter. I’d once lost a significant amount of weight earlier in my life, where I spent two hours a day at the gym and persisted in this effort for more than half a year. In this case, the results were long-lasting. Overall, however, these traditional approaches took time to yield results, were labor-intensive, and were difficult to sustain.

As I was thinking about what to do in light of my blood glucose results, I remembered the name of a researcher, Satchin Panda, whose work said that the timing of food intake has important consequences for metabolic health. There were two studies in this field that caught my attention:

I was intrigued that limiting food intake to an 8-hour window each day, with no change in food type or quantity, could have significant health benefits. It wasn’t clear whether this protocol could be applied to reversing insulin resistance in humans, however, the underlying mechanism made sense, and it seemed worth trying.

Starting with TRE – defining the approach

After re-familiarizing myself with Satchin’s work, I decided to stop eating at 8pm each day, and over the next three days, my fasting blood glucose levels returned to normal. This was likely due to the longer fasting times. I hoped the earlier results were a fluke, but additional testing confirmed the diagnosis of pre-diabetes, with an HbA1c of 6.1%.

At this point, I was a bit nervous. I reached out to the researcher, Satchin, as well as two MD colleagues from the diabetes field, to ask for their advice. Satchin told me he’d seen others, including South Asians, reverse early onset pre-diabetes using this protocol. He suggested an earlier cutoff time (6 or 7 pm), and recommended oats and lentils to help with the longer fasting times. Both MDs told me to lose extra pounds, and one told me that humans don’t need dietary carbohydrates to remain healthy. This was new information for me, and it gave me license to exclude all refined carbohydrates from my diet.

From this feedback, I modified the plan to start eating at 10:30 am and to stop at 6:30 pm, and to restrict all refined carbohydrates – no added sugar, no bread, no potatoes, no pasta, no rice, no processed fruit juice.

The most challenging aspect of TRE was getting enough food within the given time window. I dealt with this by paying attention to my hunger levels and eating at those preferred times, and by reminding myself that it was OK to eat during the time window.

The second week on TRE was the most difficult. I was voraciously hungry in the evenings, and coped by drinking water. I stayed with the diet, and after about six weeks, I’d become accustomed to the protocol.

The biggest change I noticed on TRE was an improvement in sleep quality, particularly in the mornings. There was also some improvement to my skin, and a slowing of my heart rate, which I noticed when going to sleep.

Next phase on TRE – no restriction on food types

After two months on TRE with no refined carbohydrates, I’d lost 13 pounds and had lost two inches around the lower waist (belly) – an area that was previously intractable to weight loss efforts.

From there, I stayed on TRE, but I became less restrictive about my food choices. On TRE alone, I went from November to March without gaining weight and was able to enjoy a full range of holiday foods.

Although I started eating refined carbohydrates again, I noticed a preference to not eat them in large quantities, because doing so left me feeling unwell and hungry later on, which made it harder to adhere to the fasting times.

I’ve now been on TRE for eight months. During this time I lost 20 pounds, or 12% of my starting body weight. I also lost four inches around the waistline. Six months from the time of my diagnosis, my HbA1c was one percentage point lower – from 6.1% to 5.1% – and I am no longer pre-diabetic.

Importantly, the health improvements that I have experienced on TRE happened in the absence of exercise – my step count (primary source of activity) has been lower during this time.

What I like most about TRE is that it provides one clear rule that I can follow. Having to fit my food intake into a given time window encouraged me to be more proactive about my eating, and in that way, TRE also served as a hack to improve my eating habits.

I feel lucky to have come across this finding – to have a research background and access to the primary literature, and I want this information to be accessible to others. No medical professional told me to eat this way. Without TRE, I would have had to rely on traditional approaches of “eating better” and “exercising more” to reverse my pre-diabetes, without clear guidelines on how to most effectively do this.

I’ve also seen TRE work in for friend who lost 28 pounds in 4 months, about 13% of their starting body weight. This person did not overtly restrict food types (aside from eliminating 1-2 sodas per week), and did not feel deprived on this diet. They used a fasting time of ~14 hours per night.

Lessons learned and discoveries made

When I first started doing TRE and restricting refined carbohydrates, I thought I would have to eat this way for the rest of my life. This turned out not to be true. My experience suggested that an “extreme” diet – TRE with no refined carbohydrates – could be used for a limited period to reverse insulin resistance, and that TRE alone, with no restriction on food types or quantity, could be used to maintain that new state.

Despite a wealth of information on how to lose weight and reverse metabolic disease, there is a lack of knowledge for how to most effectively do this. The finding of TRE – that when we eat has profound implications for health, independent of food type or quantity – reminds us that there are still discoveries that can be made to make weight loss and reversal of metabolic disease more accessible and effective.

I found TRE easy to implement, effective in terms of results, and rooted in an astounding set of scientific discoveries – that when we eat, independent of how much or what it is, has important consequences for our health.