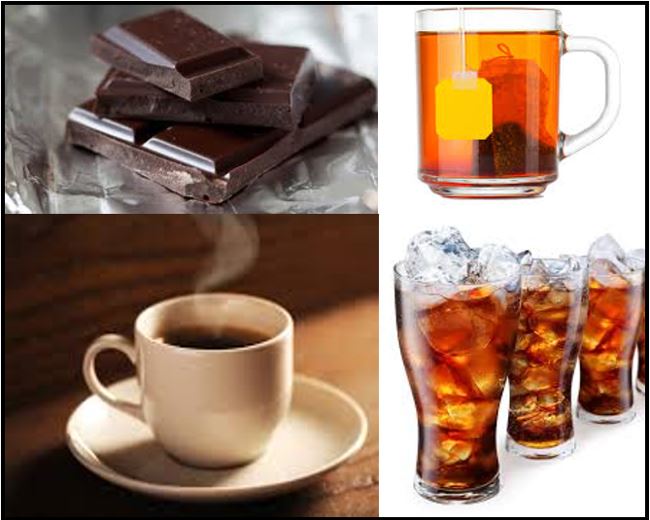 Caffeine is one of the most used stimulants in the world with over 80% of adults in the US consuming caffeine daily. Caffeine is most commonly consumed through coffee, tea, soda, or energy drinks, but foods such as dark chocolate also have high levels of caffeine. Given the wide spread consumption of caffeine, it is important to understand how it affects our physiology.

How much caffeine do you consume?

The average caffeine intake in the US is 165-300mg/day (Mitchell et al., 2014). Below is a table of approximate caffeine in a single serving of common caffeine containing food and beverages.

How does caffeine affect the brain?

Caffeine has a similar molecular structure as neurotransmitter in the brain called adenosine. Adenosine binds to receptors in the brain to make you tired. If you have been up for a long time or did not get enough sleep, adenosine levels will be high as a way to signal that your body needs rest. If you got a sufficient amount of sleep, adenosine levels will be low. Because caffeine has a very similar structure as adenosine, it can bind to the same receptors to block adenosine from binding. Therefore, consuming caffeine tricks your brain into thinking that it is not tired.

Caffeine has a half-life of ~6 hours, meaning that caffeine will only have about half of the effect 6 hours later, leading to increased drowsiness. This is usually the reason that people drink afternoon coffee or tea. Overtime, your brain will adapt by creating more adenosine receptors so the same amount of caffeine is no longer sufficient to trick your brain. To counteract this, and still get the arousing effects, you would need to drink increasingly more caffeine.

For more a video summary and more information, click here.

How does caffeine affect sleep?

Most people notice that if they drink coffee late in the day, it may make it harder for them to sleep. Research has shown that even one or two cups of coffee in the morning can alter the quality of your sleep at night. Studies in healthy adult males found that after consuming 200 mg of coffee at 7am (peak levels of 17umol in saliva), there was still 3umol in the saliva at 11pm at night. Low levels of caffeine in the saliva at night (3 umol) was still sufficient to significantly decrease sleep efficiency and total sleep compared to non-caffeine drinkers (Landolt et al., 1994).

It is common to hear someone say, ‘I can sleep even after drinking a coffee. Coffee has no impact on my sleep,’ however it is rare to find no effect of coffee on sleep or alertness.  It is likely that people who claim that they can sleep even after a cup of coffee would actually get better sleep if they don’t consume coffee before they go to bed.

How does caffeine affect the body? 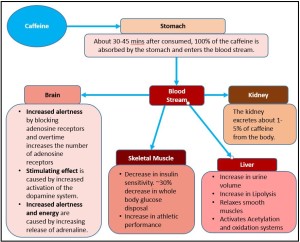 Like the brain, the heart also had adenosine receptors. Caffeine has many effects on the cardiovascular system including heart rate, blood pressure, vascular tone, the sympathetic nervous system, myocardium and the renin-angiotensin system. Because there are multiple types of adenosine receptors that caffeine can bind to, it can have both simulating and suppressing effects. Caffeine can also alter cholesterol. However, because it can have both beneficial and harmful effects, there is not much of an impact.

The effect of caffeine on metabolism is a bit complicated and not completely understood. Caffeine decreases the calcium absorption in the gastrointestinal tract. However, it is a small amount that can be offset by simply adding ~2 teaspoons of milk to a cup of coffee. Caffeine also has counterintuitive effects on skeletal muscle. For instance, it has been shown that caffeine can improve athletic performance in running and power-based activities, but it also decreases insulin sensitivity in sedentary individuals (Shearer and Graham, 2014). Data compiled from 11 different studies on caffeine and insulin sensitivity discovered that on average, caffeine decreases whole body glucose disposal by ~30% (Shearer and Graham, 2014). It seems inhibiting proper glucose disposal in skeletal muscle allows for more immediate energy for muscles, which explains enhanced athletic performance and why glucose levels stay high in sedentary individuals.

Therefore, although caffeine alone has no calories, it still has wide spread effects on the brain, vital organs, and metabolism.

How does caffeine affect your biological rhythms?

Caffeine can affect your biological rhythms through multiple pathways, including altering physiology as described above. Multiple studies in flies, mice, and humans have found that caffeine can lead to phase delays of your biological clocks, especially when provided at night (Wu et al, 2009; Oike et al., 2011; Ding et al., 1998; Wright et al., 1997). This is likely due to increased arousal that leads to delayed sleep onset.

Caffeine has also been shown to suppress melatonin secretion (Wright et al., 1997). Melatonin is a hormone produced in the pineal gland that help you fall asleep. Light suppresses melatonin production so it is low during the day. Research suggests that caffeine also suppresses melatonin, however, this only seems to be an immediate and temporary effect.

When caffeine blocks adenosine receptors in the brain, it leads to an increase in cAMP (cyclic AMP) signaling which decreases your homeostatic sleep pressure by making you feel more awake. Importantly, cAMP is also an important signaling molecule in your molecular clocks. Increased cAMP signaling during times that you should be resting can delay your biological rhythms (Landolt, 2015).