A Prized Life: A glimpse into the life of Nobel Laureate, Dr. Roger Guillemin

A Prized Life: A glimpse into the life of Nobel Laureate, Dr. Roger Guillemin

(LA JOLLA) – As part of our project to better understand healthy lifestyles in our society, we will be interviewing a wide variety of people that are living healthy lives. I am honored to have, as our first interviewee, Dr. Roger Guillemin, MD, Ph.D., a Nobel-laureate in endocrinology, artist, husband, father of six, grandfather, and still active 92 years old. In the interview, we talked about his life, his family, and his daily lifestyle (when, what, and how much he eats, sleeps, and moves). In order to understand his lifestyle, first, you’ll need to know more about his life.

Dr. Guillemin has lived a fascinating life. He grew up in Dijon, France, the capital of Burgundy, and stayed there to complete his bachelor’s and begin his medical degree. He moved to Montreal to pursue his longtime interest in research and worked with Dr. Hans Selye, whose mentorship played a large role in his life. As Dr. Guillemin explains, Dr. Selye was a leader in the field, “he was the first to introduce the word ‘stress’ into conversation…to mean pressures in one life. Before that, stress was a term only used by engineers.” There, he completed a thesis for his medical degree and continued on to receive a Ph.D. in Physiology. While in Montreal, Dr. Guillemin nearly died of tubercular meningitis, but there was a silver lining. After he recovered, he married the head nurse who cared for him, Lucienne Jeanne Billard. Lucienne became a well renowned Harpsichordist and together, they had six children.

After completing his Ph.D., Dr. Guillemin began his career as a professor and researcher in the United States at Baylor University in Houston, Texas. He briefly returned to France to run a lab in Paris, while maintaining his lab in Texas, before returning to Baylor. In 1970, he joined the Salk Institute for Biological Studies in La Jolla, California, where he remained for the rest of his career and still currently resides. His research focused on understating chemical regulators originating in the hypothalamus, which he suspected controlled the function of the pituitary gland. He is most famous for discovering Thyrotropin Releasing Factor/Hormone (TRF) and Luteinizing Hormone Releasing Factor. In 1974 he was elected as a member of the National Academy of Sciences and in 1977 he received the Nobel Prize in Physiology or Medicine, alongside Dr. Andrew V. Schally “for their discoveries concerning the peptide hormone production of the brain,” and Dr. Rosalyn Yalow “for the development of radioimmunoassays of peptide hormones.”

The Nobel Prize was only one of many prestigious awards that Dr. Guillemin received, including, but not limited to, the French Legion of Honor (1973), Lasker Award (1975), Dickson Prize (1976), and the National Medal of Science (1976). In 1989, Dr. Guillemin retired and began a successful career as an artist, a field that his wife and most of their children also pursued in various forms (music, dance, sculpture). Although he retired many years ago, Dr. Guillemin remains a member of the Salk community and attends almost every lecture.

In addition to Dr. Guillemin’s extremely successful career as a scientist, and then as an artist, he is a tremendously humble and lovely person. When speaking about his life, he didn’t focus on his accomplishments, but rather spoke of the fascinating lives of his wife, children, and grandchildren, and his admiration for his mentors and collaborators.

For 50 years as the head of his own lab, Dr. Guillemin’s daily schedule was pretty consistent. In fact, he has had the same assistant, Bernice, for the past 42 years. He woke up around 6:30-7am, without an alarm, every day. He has never been much of a breakfast person. Breakfast was usually a small meal: coffee with some toast and jam. He arrived at lab around 8am, sometimes had a small lunch around 12pm, no snacks, and then returned home around 7pm to have dinner and a glass of wine with the family. At home and whenever possible, he ate only French food. He went to bed around 10pm and then started again the next day.

He never drank soda or ate processed foods because he did not care for it. When asked if he has ever eaten from a vending machine, the answer was an immediate, “Absolutely never. No, never.” He has never really restricted his diet, rather stuck to fresh quality food that he enjoyed.

For many years, he used sleeping pills to fall asleep. His mind would be filled with too many thoughts to sleep well on his own. In spite of his notable success, he still experienced the common stresses on scientists to continually make progress in the lab. In fact, at times, he considered closing his lab. He did not have a special trick to relieve stress, he just remained persistent, and noted that family has been, and continues to be, a wonderful support system throughout his life.

Due to his success, he frequently traveled around the world. Unfortunately, he did not have any tricks to deal with jet-lag. He said he always hated it, and that it was a real pain that he just had to get through.
Dr. Guillemin never saw himself as an athlete, but he stayed active swimming or playing tennis almost every day for most of his adult life. Over time, he transitioned his activity to walking two miles a day up and down Mt Soledad in La Jolla.
Dr. Guillemin says that his life now is quite different than it used to be. He still wakes up around 6 or 6:30am without an alarm, but he wakes up once or twice a night. If in town, he comes to the Salk Institute to work in his study and attend lectures. He heads home a bit earlier, and goes on shorter walks (one mile instead of two) than he used to, but he still prefers fresh French cuisine.

When asked if he had any life mottos or words to live by, he answered, “No, not really. Except that I repeat, I drink wine every day.”

Dr. Guillemin has lived a very intellectually stimulating life. He has been a physician, a professor, a world-renowned research scientist, an artist, a husband, a father, and a grandfather. He’s always been an early bird that never needed an alarm clock. Although he never saw himself as an athlete, he made sure to be active through tennis, swimming, and other activities. Whenever possible, he sticks to fresh French cuisine and does not snack. Throughout his life, Dr. Guillemin has kept himself physically and mentally active and at 92 years of age, he may have slowed down a bit, but he is still living an extraordinary life. 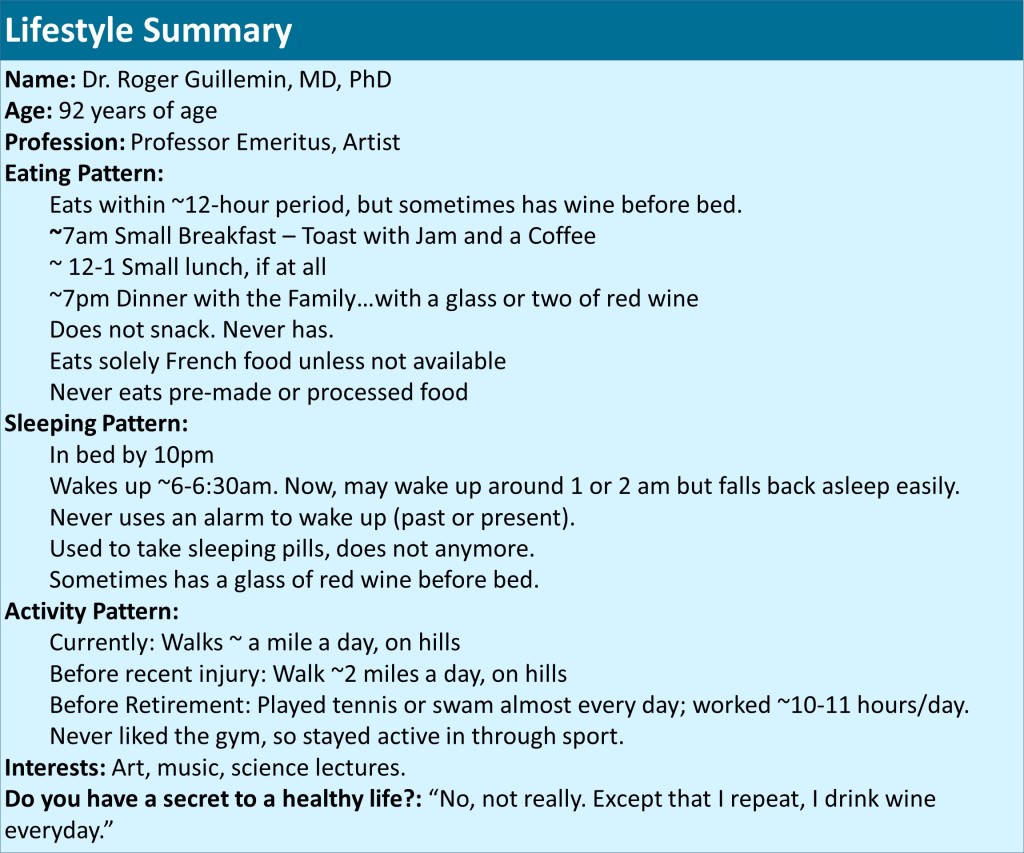 To learn more about Dr. Guillemin’s career and the field of neuroendocrinology from Dr. Guillemin himself, see https://www.youtube.com/watch?v=p39AqhvhxdE.

Sincere thanks to Dr. Roger Guillemin for his time and kindness.