I never thought I would write a diet book. But I did. I thought some people might be interested to know why.

I’m a data scientist. In my day job, I’m Director of Analytics for Facebook. I spend my time there thinking about why people use Facebook the way they do and how we can make it better for them. After hours, I write a bit and I’m a practicing Buddhist. I teach sometimes at a nearby Zen temple. None of this has much to do with dieting.

Like a lot of adults, I put on weight after college. Not a ridiculous amount, and not all at once. But I had to buy bigger Levi’s every few years, and after a couple decades I had crossed the line to overweight on the official charts. I spent most of those years working at various high-tech companies in Silicon Valley, which brought me little exercise and lots of free soda. I tried making little changes — cutting out desserts, not snacking so much, exercising a bit — but it didn’t help. I didn’t worry about it too much, but standing in the shower or getting dressed in the morning, my body didn’t feel quite right. It didn’t feel good. It didn’t feel like me.

Then in 2014 I started a brief stint at a small food startup in San Francisco as their VP of Data. Suddenly instead of spending my days with out-of-shape software engineers, I was surrounded by food scientists, plant biologists, and accomplished chefs — and they were mostly young and healthy and obsessed with food. It seemed everyone was on some sort of diet — not necessarily to lose weight, but to nurture their bodies or heal the planet. People ate vegan, gluten-free, paleo, no-carb. And they talked about these food choices all the time.

One of my scientist friends there, Matt Baggott, would often talk about the latest research on diet and health. One day he emailed around a paper on time-restricted eating, where mice were allowed to eat as much as they wanted but only for certain hours each day. Even when these mice were offered unlimited high-fat and high-sugar food, they didn’t get fat — as long as they stuck to eating only during certain hours. Over lunch that day I mentioned that I had lived in a Buddhist temple in Thailand years ago, and this was how the monks there ate, too. They had no real dietary restrictions, but they could only eat from dawn until noon. The mice in Matt’s paper didn’t have quite so tough a schedule — their eating windows was 9 hours — but it seemed like the same idea.

Matt was excited about this research, and I was doubly intrigued by the Buddhist connection, so on a whim I decided to give it a try. It took just a few days to get into a routine, and within about a week I had gotten my own eating down to about 9 hours a day. I started eating breakfast only after I got to work and ate dinner as soon as I got home or even on the train if I had to work late. It felt strange at first, but soon I noticed I was sleeping better and waking up feeling lighter and more energetic. I didn’t fall into a food coma in the evenings or go to bed feeling gross after too much ice cream in front of the TV. And I started losing weight.

In less than a year I lost more than 20 pounds. Now I had to buy smaller jeans every few months.

My friend Tara Cottrell noticed the change (she was that kind of friend) and asked me my secret. I never thought she looked overweight, but I knew she had struggled with food and diets over the years. So I told her about this time-restricted system and she was also intrigued and decided to try it. She lost weight, too — not as much as me, but she didn’t have as much to lose. And she felt great eating in this new way, just like me.

Tara encouraged me to write a book about the diet. I was skeptical at first, but she started texting me why she liked this way of eating, saying things like: “Life is too complicated for a complicated diet” and “All those other diets felt like a punishment and turned food I liked into a reward. Got the kids to bed on time? Great, I’ll have a stale mini donut!” She even suggested an opening line: “Buddha was thin.” One day I took all these bits and pieces she was sending and pasted them together and pretty soon had about three pages, most of which is now the introduction to the book. I sent those pages back to Tara and told her I’d only write the rest if she’d do it with me. We decided we’d go ahead and give it a try. That was March 2015. We got an agent that spring and sold the idea to Running Press that summer. We wrote all fall and sent the complete manuscript off to our editor on December 1. 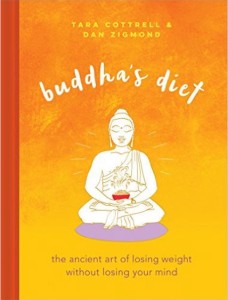 Writing the book together was a lot of fun. Other friends tried the diet and liked it. We immersed ourselves in the scientific literature on nutrition, exercise, sleep, and all kinds of fascinating topics to understand why a diet like this can work. I read lots of Buddhist sutras I had never studied before, and revisited passages I had always liked. I might spend the morning with a recent medical journal Tara had sent me, and then all afternoon deciphering some obscure sacred text. I realized that Buddha was a bit of data scientist himself — always insisting his followers rely on evidence rather than faith, just as we tried to do in our book.

Tara and I would take turns writing the first draft of various chapters and then edit them online together. We’d meet for tea sometimes to talk about where we were. For a while I could still tell who had written what, but over time we got both our fingerprints on just about everything. We developed a common voice. I would try to write as if I were Tara, and I think she tried to write as me. Somehow we met in the middle. We took a day trip down to San Diego together to visit Satchin Panda, the scientist who led the original research Matt Baggott had sent me, and he turned out to be a great guy. Not only did he bring us up-to-date on his own studies — he had grown up near some important Buddhist sites in India and we talked about their history, too.

We wondered sometimes if Buddha would approve of a diet book. We didn’t want to contribute to anyone’s unhealthy obsession with their body or weight. Buddha certainly wouldn’t want that. But at the same time, we knew many people suffered with their relationship to food. We did, too, sometimes. The idea that there might be a middle way — not quite dieting and not quite eating anything any time — was very appealing, and was something we wanted to share. We wanted to help people find their own balance. By controlling the time you eat, at least you’re controlling something, and this seems to help some people let go of all the things about their body and even their eating that they can’t control.

The book ended up being about a lot more than just those lucky mice and their all-you-can-eat diet, and about more than losing weight. We wrote about why we tend to overeat when we’re sad or stressed, and how to be more mindful about our food. We explained what Buddha had to say about drinking alcohol and eating meat — which may surprise you. All that research we did on sleep, exercise, and nutrition also made it in there. We even wrote about some of Buddha’s big mistakes. (Nobody’s perfect.) And in the end, I think I lost another 10 pounds before deciding I didn’t want to lose any more.

Now we’re done. Buddha’s Diet is being printed, and you can already order it from Amazon  and other stores. We have a Facebook page . Tara built us a great web site. We hope people will read the book, and we hope this ancient-modern way of eating and living will now help other people as much as it’s helped us.

We don’t really know what will happen next. But I suppose no one ever does. 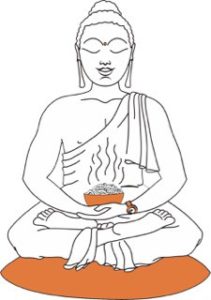